Mali: capacity building in the face of adversity

The challenges and rewards of managing the project TA to the General Controller of Public Services and Inspectorate of the Interior, Mali, in conditions of political and security crisis

When speaking of Mali today, it tends to be about dramatic events related to the security situation in the Sahel. What tends to be forgotten is that Mali – one of the poorest countries in the world – has initiated far-ranging administrative reforms related to the decentralisation of services and governance, which may provide a model for many African countries.

Reforms initiated in Mali are designed to essentially reduce the distance between the citizens and those responsible for their administration — thus creating the conditions for effective local development and the deepening of democracy at the grass roots. They are designed to enable citizens to participate in local affairs, building on measures that have been progressively implemented over the past years.

Human Dynamics' experience and knowledge of Mali has built up over several years, not least as the European Union has increased its technical assistance projects to the country. EU-funded projects in Mali include four that are part of the Technical Assistance Support Program for Administrative Reform and Decentralisation in Economic Development (PARADDER):

At Human Dynamics, we are pleased to be implementing the contract for the Technical Assistance to the General Controller of Public Services and Inspectorate of the Interior. For this project, we have one technical expert permanently based in Bamako with responsibility to support these two beneficiary institutions: the General Controller, responsible for oversight of public expenditure and management of decentralised governance; and the Inspectorate of the Interior, responsible for auditing these local institutions.

The project commenced in March 2012 — less than two weeks before the events that would plunge Mali into a deep political and security crisis.

Project management in conditions of political and security crisis

In March 2012 a coup was launched that overthrew the civilian government. In this context, any cooperation between donors – including the EU – was dependent and conditional upon a resumption of political dialogue and the restoration of the rule of law and the Constitution. Between April 2012 and October 2012, the project was suspended.

The courage and perseverance demonstrated by our Key Expert during this troubled period in Mali was highly appreciated by the beneficiaries who were happy to find the same expert in place after the lifting of the project suspension in October 2012. At this time, we resumed project activities, helping to build the capacity of the beneficiaries, with whom we have an excellent working relationship.

In January 2013, French troops – supporting the Malian Government – intervened to stop the progress of insurgent groups in northern Mali. Throughout this entire period, and despite the conflict, our project kept going.

It has been both challenging and rewarding to manage this project. Our priorities were to ensure that we manage to keep the project on track, taking account of the various political and security constraints, and not least to ensure that our Key Expert was safe and looked after.

But the rewards of this project have been immense – not least when I was in Mali in July and saw the democratic process taking place, with the National Presidential elections. Seeing the enthusiasm of the people and the sheer numbers voting and taking part reminded me of how much some of us take things for granted.

While Mali is working through transition, I have no doubt that the energy of its people will help the country in this. 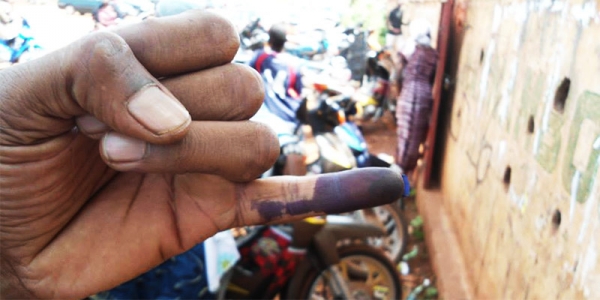 Image: a voter's finger dipped in ink. Since gaining independence from France in 1960, Mali has been afflicted by several rebellions, insurrections and coups. French troops intervened in Jan 2013, following an armed coup in March 2012. In the aftermath, in June 2013, a peace deal was signed between Tuareg rebels and the government, and open Presidential elections took place on 28 July 2013. Our project team has remained in Mali since Feb 2012.